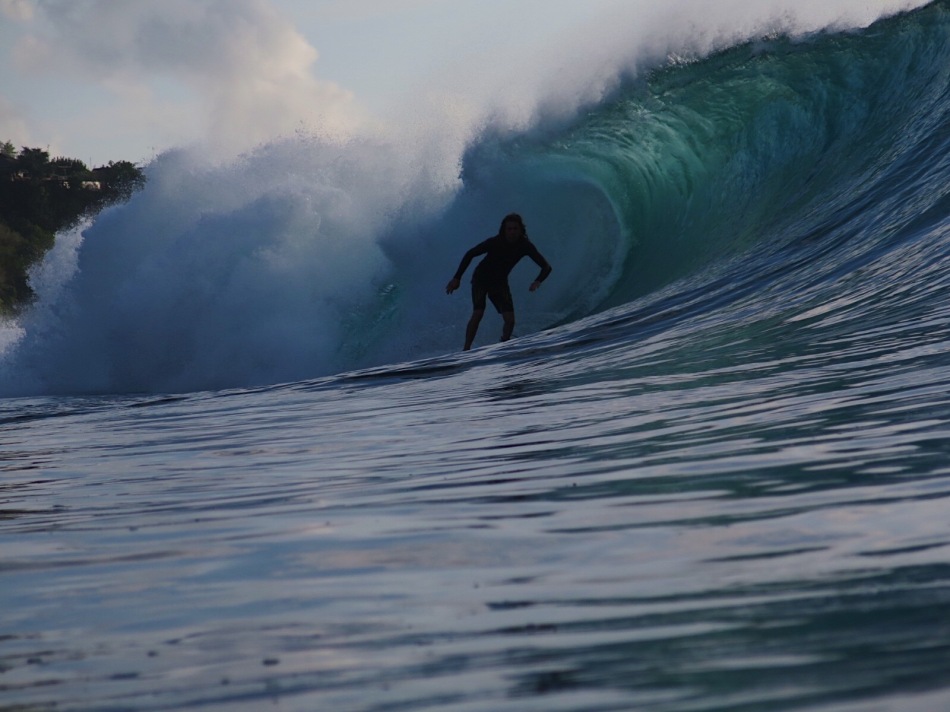 Ever heard about the notorious Balinese wave that breaks over a sharp, shallow reef shelf, creating an extremely explosive and exciting barrel? All happening in front of a 15 meter high cliff where crowds can stand and gaze with amaze in their eyes as surfers either get slammed on the reef, resulting in both broken boards and dreams, or fly out of a spitting barrel with a smile that can be seen all the way from Bingin (800 meters away from Padang Padang).

The extreme rides and the extreme wipeouts the wave has to offer is probably why one of the most prestigious novelty surf events is held at Padang Padang each year. This wave is a guaranteed barrel machine, for the ones who dare to surf it.

A couple of days ago I gave it a try.

My dad, my brother and I paddled out at sunset, only to watch the waves up close. We had no intentions on actually taking any waves. We figured that if you’re going to surf this wave it might be a good idea to give it a proper look before even thinking about paddling into a wave. After 30 minutes of watching both dad and I got restless and figured we could give one of the smaller ones a try. My brother, most likely the smartest one out of us three decided that continuing to observe the waves was a smarter move. It’s impossible to tell a waves size because it seems like everyone measures waves differently, however I would call it 4-6 ft surf as the waves were easily over my head when standing straight, even the smaller ones.

Me and dad stroked into a couple smaller waves and only rode them on the shoulder. We were both scared out of our minds! How could a wave be THIS scary when it looks so easy when you watch videos and photos of other guys riding it.

After a couple of good, adrenaline pumping waves we figured that it was best for both of us to head out of the water while none of us had any scratches yet. ( Dad had actually scraped up his leg pretty bad on the way out)

Note: It felt like we were definitely the kookiest out of everyone in the water.

This time I was pumped up! I had been dreaming about surfing Padang Padang all night. This time I was going sit deeper and take of on the bigger ones! I’d been listening to my favourite hip hop songs all day ( ATLiens by Outkast was repeated several times) in order to get in the right mood. Julia was going to sit on the cliff and take photos. Dad was going to paddle out and take photos, as he had injured his leg and felt that you have to be 100% when surfing a wave like this, I agreed.

I paddled out first.

The lineup was spookishly empty. 4ft Padang Padang with only 4 people out..? What? Then it hit me with a sting. Then another one, another one, and another one! I trillion billion jelly fish were out in the lineup, stinging everyone back to shore who paddled out. I was stubborn and caught one wave before accepting my defeat against the million trillion jelly fish. Dad never even mad it out.

Same day, this time at sunset. This time on low tide.

I figured the outgoing tide might have dragged the jellys away with it. And it had. The swell had picked up and so had the amount of surfers and photographers in the water. With 10 surfers and 10 very excited photographers out in the lineup the atmosphere was energised. Everyone wanted to shine in front of the cameras and all the photographers hassled each other to be closest to the surfers, in order to get the perfect shot.

I sat and waited for what felt like forever but it was most likely not more than 20 minutes before paddling on my first wave. The wave finally came. I was in the right spot and it was my turn to go. I paddled as hard as I could. With the offshore wind spraying my face with water, it felt like i was paddling faster than ever before. As I got the board under my feet, ready to set up my line. The whole wave hit the reef at the same time. It was a closeout. I had no other choice than to pull into the barrel, with no chance of making it out. I got slammed to the bottom but lucky landed with my but on the reef. As I surfaced I realised that I just took the first wave of the set. Meaning that there were 3 more waves heading my way. I looked up and the wave approaching me was even bigger than the one i caught. I ditched my board and got dragged across the reef. As i came up again the water was to my knees. With the last wave approaching me fast I had no where to go. I still don’t know how but thanks to some miracle I made it through without a scratch. I grabbed my board and paddled as fast as I could back out to the lineup. I past my dad on the way out and he showed me the pictures he got of me and my wave. They were in my opinion epic! After seeing the pictures the session just went on. Good wave after good wave. The whole session was a mix between being scared, adrenaline rushes and feeling pure joy. I went in when my arms felt like they would fall off and i couldn’t get enough speed to catch a wave.

When I got up I quickly transferred the pictures over to my phone then I started to pack our bags in the dark for our early departure to Java the following morning.